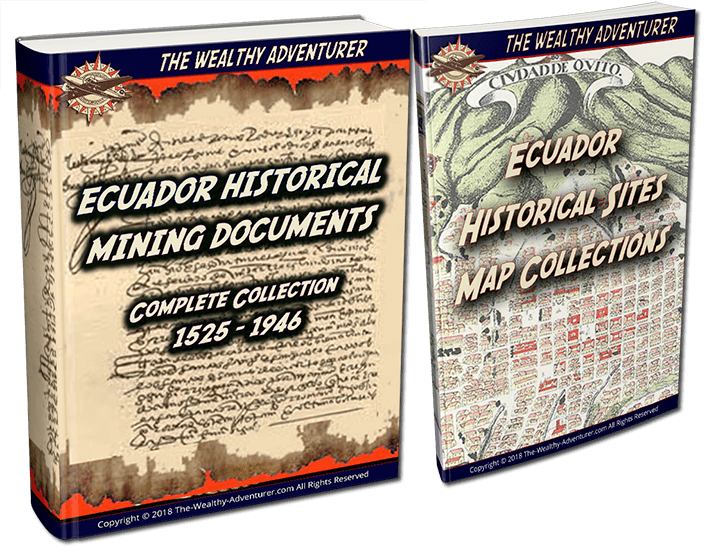 Soon after I had moved to Ecuador to enter the alluvial gold mining business full-time, many years ago, my life-long passion for investigation grabbed a hold of me like never before. My curiosity about all of the lost mining camps and the rich mining history of Ecuador took control of me. In all of my spare moments, I feverishly began to seek out libraries, archives, private document collections and historical maps. I began to build my own unique library. 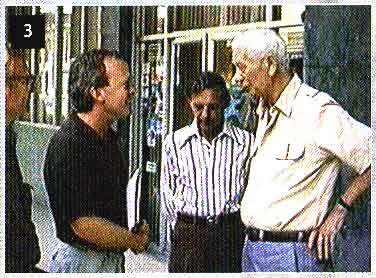 Juan and I meeting for the first time in Guayaquil

In those early years, when I first met Juan Moricz (see Gold of the Gods by Erich Von Daniken ) in Guayaquil and saw his fantastic, personal library of over200,000 books, I was also introduced to a rather mysterious man who was“visiting from afar”. I observed that Juan conversed with this man in his own native Hungarian tongue. Zoltan, Juan’s partner and assistant of over 15 years, also joined in to these private conversations in a very animated manner. What in the hell were these guys talking about? What was so damn interesting between the three of them? 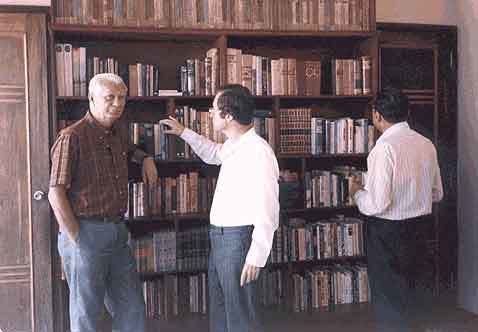 Juan and Laslow in Juan's Library

Only weeks after I had gotten to know Juan Moricz, I had gone home to Calgary, Alberta to begin preparations for permanently moving to Ecuador. One night, a phone call came in rather late. It was Zoltan calling me from Guayaquil to give me the bad news that Juan had just passed away that same evening. Juan had been a bit ill, but the cause of death was undetermined and they had discovered a rather large, suspicious contusion on the back of his head.

I was terribly disappointed and saddened. I had so many more questions that I had wanted to ask Juan about the ancient history of Ecuador, the mining history, the origins of mankind according to a unique language evolution tree map that Juan had created, and so much more. Juan’s life’s work and research was incredibly vast and important, and now it stood in danger of largely being lost forever. This is a topic I will explore with you more on another day. 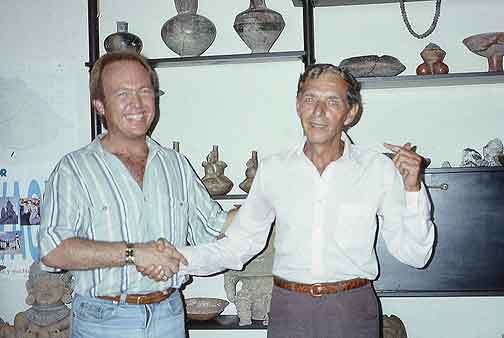 Several months later I returned to Ecuador to visit Zoltan for a few months. I returned many more times after that and became very close friends with Zoltan over the years. During those years, I had the great pleasure and opportunity to learn all about Juan’s and Zoltan’s adventures together. I learned of many amazing discoveries they made. Zoltan took me and showed me numerous, interesting historical sites that had been lost to modern knowledge, especially sites that had to do with old Spanish mining camp locations from the 1500's and 1600's.

One evening after dinner, I asked Zoltan who the mysterious visitor was that had been visiting Juan when I first met him. Zoltan’s response both surprised me and shocked me.

First, he said, "Stan, promise me that you won’t tell anyone what I am about to tell you."

I responded, "I won’t say a word to anyone as long as you live."

Zoltan then explained that the man’s name was Laslow and that he was a "special agent",Jesuit Priest on a "Secret Mission" in Ecuador. His job was to locate the ancient sites of El Dorado where the Jesuits manually mined millions of ounces of gold during the early years of the Spanish Conquest. Needless to say, all of this mining was done with Native slave labor.

But, what came out of Zoltan’s mouth next is what really blew me away! Zoltan told me that Laslow had asked to store more than a thousand pages of old documents and maps in Zoltan’s unused closet at home. He went on to tell me that Laslow had been gone for nearly a year and had not been in contact with him. Zoltan knew of my overwhelming curiosity and desire to learn everything I could about the mining history of Ecuador, amongst other things.

Zoltan then invited me to make photocopies of anything that interested me in the closet. I spent 3 whole days running back and forth between Zoltan’s apartment and the nearest photocopy center. I went back to Canada with nearly a hundred pounds of photocopies in my luggage. I studied that load of treasured documents for many months.

Laslow had accumulated copies of old secret Jesuit documents, books and maps. These documents included detailed accounts of specific locations, gold production quantities, peoples’ names and experiences in their personal lives. There were treasure galleon wreck locations, historical accounts from Inca and pre-Inca mining activities, and even the location of where ancient giant human remains had been unearthed. I walked around for months in a state of shock with all of the old secrets that I now possessed.

I came to learn that the old myth of the Seven Lost Cities of El Dorado was actually based on fact. I learned that the Jesuits were experts at spreading disinformation around the colonies. Their clever deceptions sent Spanish explorers all over the Americas in search of El Dorado. In North America, the legend was called the Seven Lost Cities of Cibola.

Poor Sir Walter Raleigh searched the entire length of the Orinoco River based on false, secret information he had acquired. All the while, the Jesuits just kept packing their golden riches away by the tons - literally.

After learning of the real existence and locations of the Seven Lost Cities of El Dorado, my mind took me away somewhere to wonder what things were like back then. Does your mind do that to you sometimes too?

Wouldn’t it be neat to be able to replay the events of those ancient times? To me, it would be so interesting to see the huge amounts of gold production that were taking place. Wouldn’t it be fun to be present and watch those cleanups? 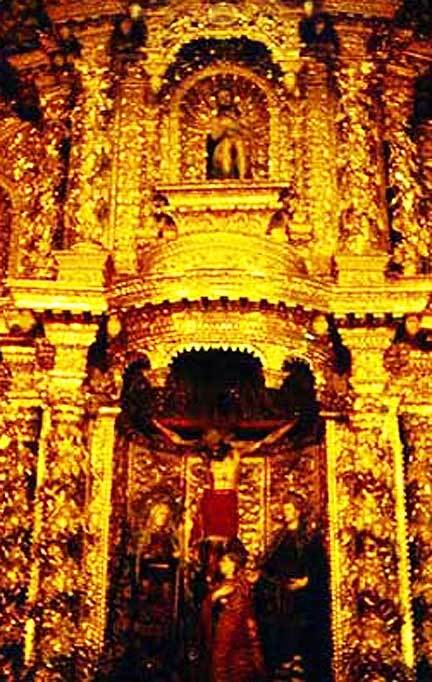 For the Jesuits to only have taken a small part of their gold production and used it to decorate their church in Quito, La Compania with 7 tons of gold, those must have been some pretty big cleanups and some pretty large sluice boxes! I’m sure they didn’t have the Knelson Bowl Concentrator back then.

Think of being able to watch them package up that much gold and prepare it for transport over the mountains to Quito. They must have used a very long string of strong burros to transport that much gold over the years.

Obviously, we cannot travel back in time effectively to be able to witness all of those amazing ancient scenes. However, I have come up with a special surprise for you that can give us some great insights into those old, golden times. This has been a dream of mine for over a decade now. The dream has finally come true!

After many months of scanning with optical character recognition technology, and thousands of corrections to the scanned results, I have prepared a very special, complete collection of historical mining documents which include letters, statements, declarations and gold production records all the way back to the early 1500s! That said, there is both “bad news”and there is “good news”.

The bad news is that this entire collection is in Spanish and has never been translated into any other language. Perhaps that is not all bad!

Now here is the good news:

1. This is the very first time ever that these documents are being revealed to the public.They have been hidden, secret and lost up until the present moment.

2. This information is explosive for people who want to go prospecting in Ecuador. It is also great for collectors, historians and armchair adventurers. I believe that this is the finest and most complete collection of its type in the world. The information reveals exact locations and place names as they were known in years gone by. You can literally walk right up to many of these lost mines and sites with this new information and a modern topographical map and GPS unit.

3. When you combine this e-package with my other e-package, The Ultimate Ecuador Gold and Treasure Map Collection, you are completely and totally equipped to find precious metals deposits all over the entire country of Ecuador. This will likely be my final e-package that deals exclusively with information about Ecuador. 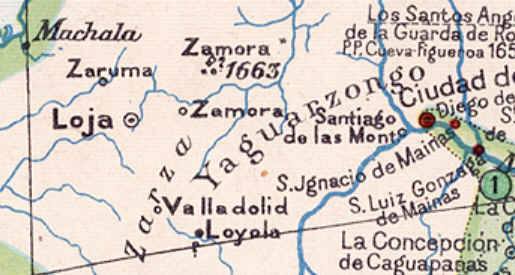 This huge Ecuadorian Historical Mining Documents
e-package includes absolutely everything you need
to rediscover all of the lost and forgotten mining sites
around the entire country of Ecuador!

Four extremely rare historical maps that include information from before and during the Spanish Conquest in Ecuador as listed below: 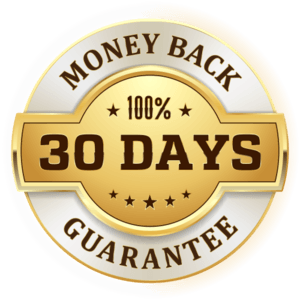 To purchase any of these e-materials, please click on the corresponding "Buy Now" button. You may pay with any of the major credit cards accepted by Payza. These are instant downloads! There are no physical products sold here. Nothing will be shipped.