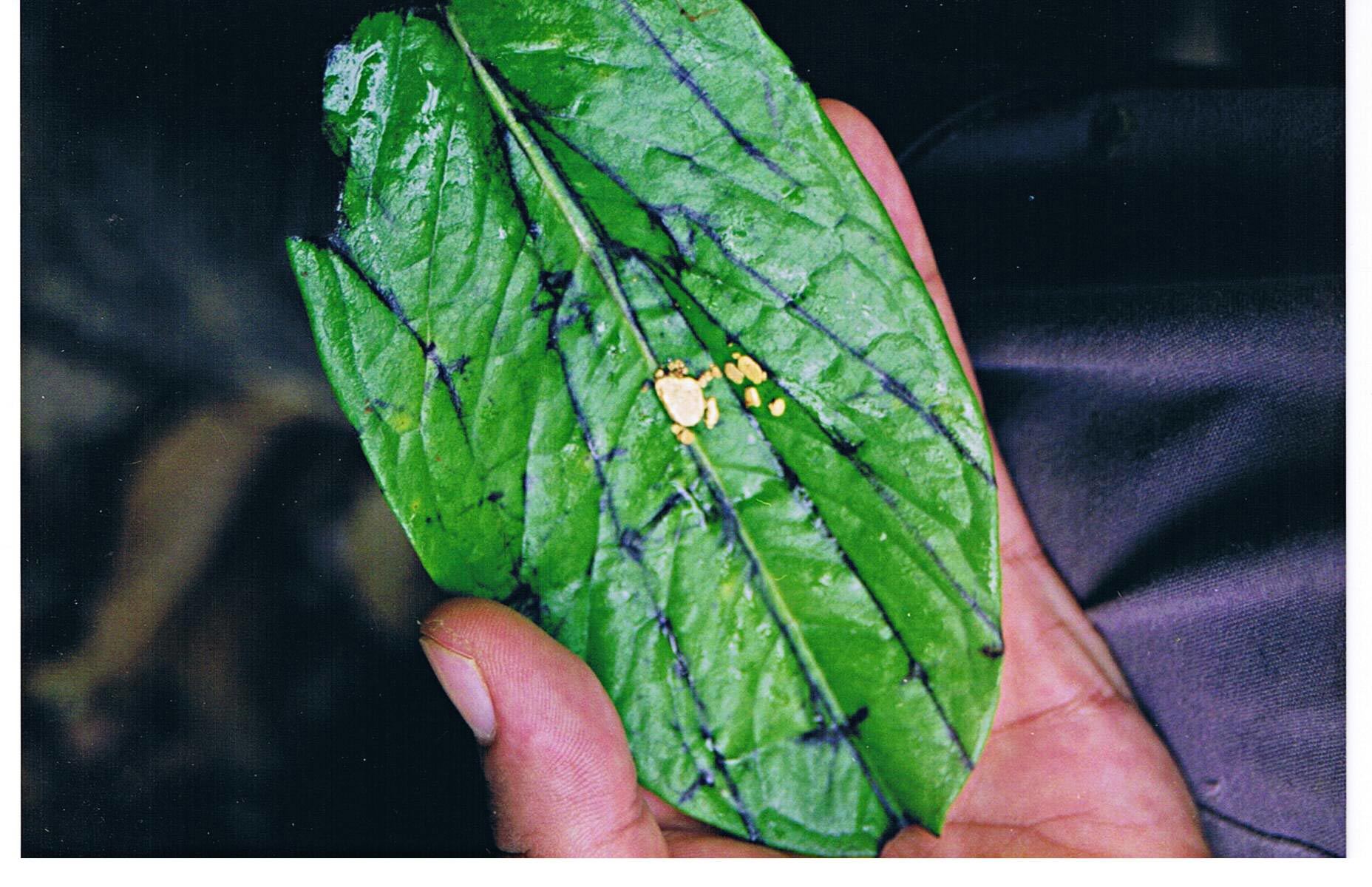 What did you think of the story about the crevicer who works the streets of New York City? His consistent success is fairly astounding. However, personally, I would hate to work in the city like that. I prefer the wide open spaces.

Back in the 1980’s, I returned to the Motherlode country of California to dredge for gold on the North Fork of the Yuba River.

I arrived on site about a month before dredging season was to begin (when dredging used to be legal there). I decided to set up on a site that the Lost Dutchman Mining Association was in the process of purchasing, just upriver from Downieville. I had to get special permission as the sale was not yet complete.

In the mornings, I strolled up and down the river banks, stopping to test pan interesting looking spots.

There was still snow on the ground and the water was so cold. The river level was surprisingly low and I was able to find plenty of cracks and potholes in bedrock exposures. Almost every crack and pothole produced eye-popping results, so I began to develop rather large expectations for the dredge. 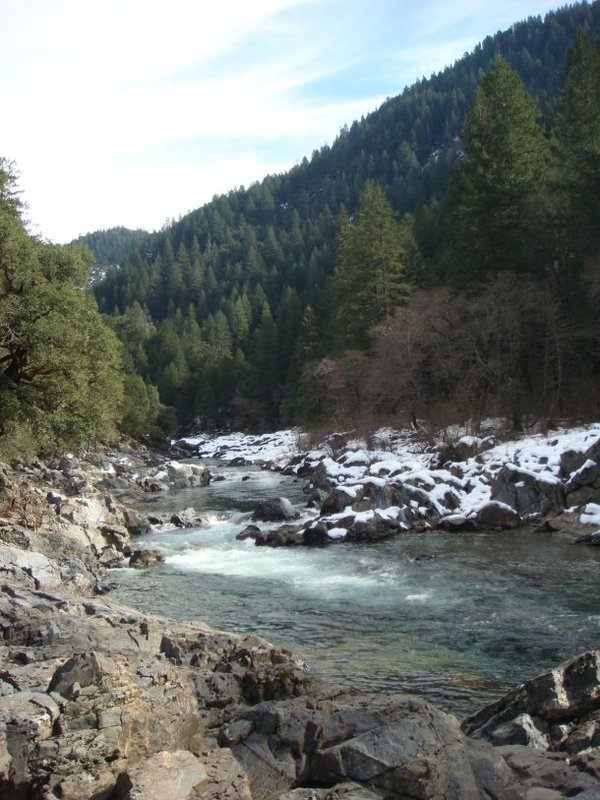 I found one pothole, a few inches above water level, that was holding some 3 gallons of water, sand and tightly packed stones. It took about an hour to finally chisel out all of the material.

I used a very large syringe to suction out the heaviest sands at the bottom. I made sure the pothole was finally empty by using a crevicing tube that allowed to clearly see the bottom of the hole through the remaining water.

That one pothole produced nearly ½ ounce of coarse little pieces of gold. There weren’t any nuggets to be found in this hole, but I was still very excited about the results.

Many years later I was gold prospecting in Ecuador on the Jatunyacu River (“big water” in Quechua). This is one of the richest rivers I have ever seen.

There are massive bedrock exposures in the upper reaches of this river. Cracks, crevices and potholes are to be found everywhere. 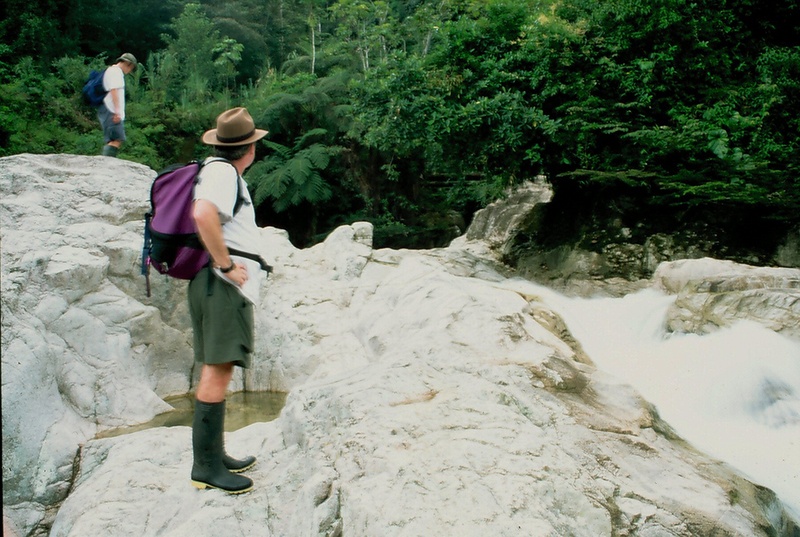 Here I am on the Jatunyacu River bedrock exposures

At one point, I was 20 feet above the current water level, checking out a long vertical crack in the bedrock. I came across a huge (2” X 1”) thin laminate of gold jammed in the crack. I have never seen (before or after) a piece of gold shaped like that in nature. I was only able to recover half of the gold as it was impossible to open up or properly chisel the crack.

Putting in a solid, 5-hour workday with mossing, crevicing and sniping on the upper Jatunyacu River, always produces more than ¼ ounce of gold. That said, it is a lot of hard work in the hot sun and never an “easy day” when I am up there.

As I previously mentioned, over the years, I have met a number of full-time crevicers. They all love their work. They are all fiercely independent entrepreneurs, preferring to work alone or in very small groups. Most of them own motorhomes and like to work in different locations depending on the time of the year. Gratefully, many of these crevicers were willing to help and teach me along the way.

In my next newsletter, I’ll share more about some pretty amazing crevicing stories and how you can benefit from them. 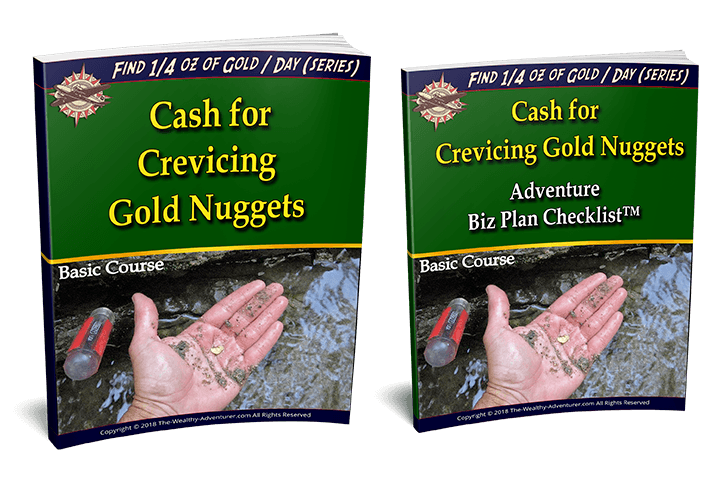 Meanwhile, I have prepared a new, basic training course called, Cash for Crevicing Gold Nuggets. I have also posted a great video clip of an experienced crevicer at work and also of the gold he recovered from just one small hole on bedrock.

In addition, I have added 3 special bonuses to this course that will blow the lid off your gold crevicing success.

The course is already for sale on my Bookstore page for $47. However, for my loyal subscribers, I have a special discount page set up with the ridiculously low intro price of $9.97. The low price goes away 2 days after you visit the private discount page.

Please check out the video, discount and bonuses here…

See you back here soon 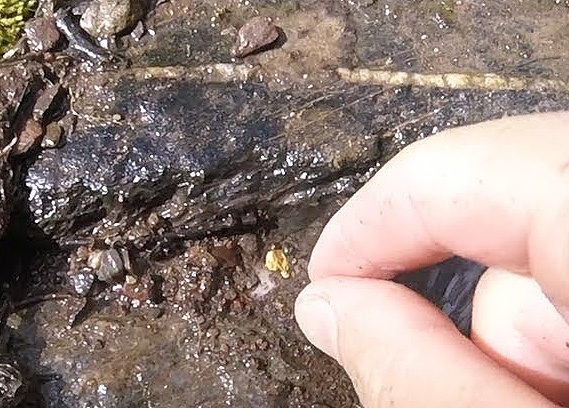 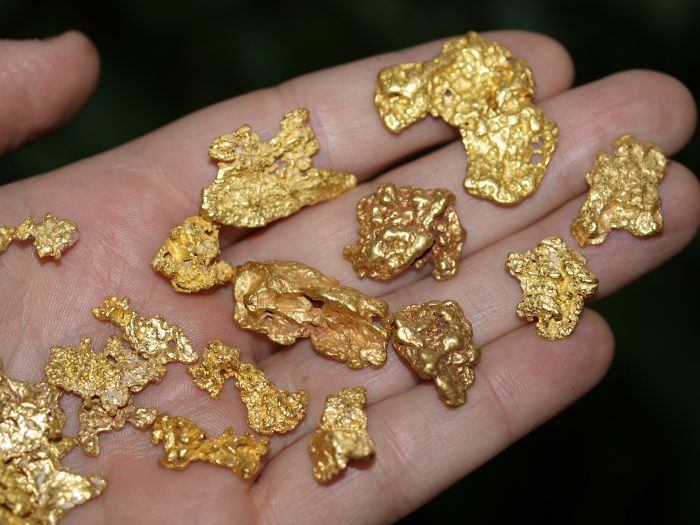