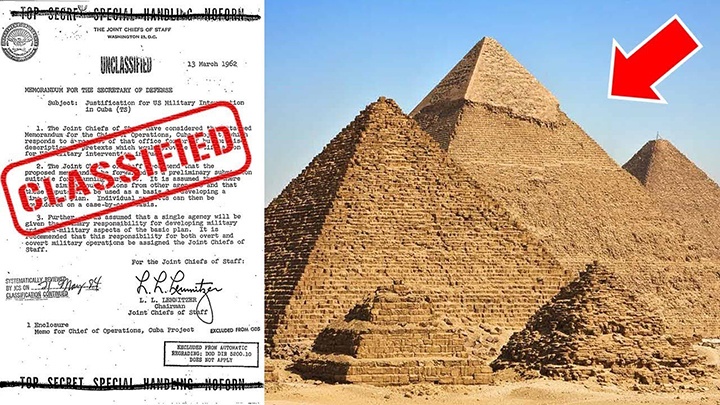 Holy Smokes! This declassified document is a bombshell. If you are interested in geology and earth's real history, this is a MUST READ document. You can find the download link below. After you download and read the document, please share your comments with us at the bottom of this page... Stan

This is No Joke!

This is no joke! There is an actual CIA document that was recently declassified which I'm about to show you. It discusses the topics of lost, ancient, human civilizations and cataclysmic events that have happened on earth several times in the last few thousands of years. These events caused those ancient civilizations to vanish off the earth, without a trace. This answers the question of why there is so much mystery and there are so many unanswered questions involving our true ancient past on Earth.

It's hard to even know where to begin with this discussion as the document is 57 pages long. There is so much to say about it.

Please give me a few minutes in this article to connect some of the dots on a variety of fascinating details that are included in this declassified document. I will post a link below so you can actually download the document and read it for yourself.

The author of this document describes the Great Pyramid of Giza as an enigma, which it certainly is. Even to this day, we are unable to explain how the Great Pyramid was even constructed. We can't even wrap our minds around its confusing internal design and layout which indicates some sort of purpose that is beyond our current understanding. It shares absolutely no resemblance to that of any other Egyptian tomb ever found.

It is a bizarre fact that the Great Pyramid was even the tallest man-made structure in the world for nearly 4,000 years. That was until the construction of the Lincoln Cathedral in England in the 1,100’s. But keep in mind that its record height included the central spire which no longer even exists today. It collapsed just a couple hundred years after its construction.

I find the Great Pyramid to be far more impressive. Let's not forget that it's built like a three-dimensional puzzle made up of some two and a half million stone blocks that are stacked with unbelievable precision nearly 500 feet high and 750 feet wide at its base.

The declassified file also lists other mysterious sites as being enigmas. This includes Easter Island, which of course, is located in the middle of nowhere in the Pacific Ocean leaving us many questions as to how people found and settled on this remote island so long ago.

Easter Island is most known for the mysterious Moai statues which are the subject of much debate. Who they were meant to depict? Why and how were they created, moved and positioned in the way that they were in the first place. What is, perhaps, more interesting than that, is just how massive they are. This is something that most people are not aware of. The statues can really only be appreciated when compared to people standing next to them.

This declassified document details that Easter Island was actually part of a lost continent called Mu. Mu is said to have sank in the Pacific Ocean during a cataclysm and Easter Island is all that's left of it.

Another ancient site is included in this document that is listed as an enigma. That is Baalbek in Lebanon. If there was one site that is truly an enigma, besides that of the Great Pyramid, it’s Baalbek. The foundation stones of the Heliopolis make up the foundations of the temple of Jupiter and the temple of Bacchus.

If there ever was an example of a lost ancient civilization that possessed some type of relatively advanced technology, the 900 ton trilithon stone blocks are perhaps one of the best examples of it. Just look how massive they are when compared to people standing next to them. Although modern archaeologists and historians credit ancient Rome for these massive monoliths, there is actually no evidence to support it. The Romans did not have the technological capability to have moved or lifted these stones or stones of this weights.

In fact, literally nothing from ancient Rome even compares to the magnitude of these stone blocks. The largest stone block within Rome is the capital block, which is only 53 tons. That is not to say that 53 tons isn't heavy, but not when compared to the trilithon stones, which, again, are 900 tons each. This equates to closer to 2 million pounds. They were somehow lifted over 30 feet up and stacked with precise alignment and precision. This doesn't include the several blocks located on top of the Heliopolis which are estimated to be at 800 tons apiece. Even the smallest blocks that make up the foundation are over 400 tons each

Other ancient sites listed in the declassified document as enigmas include Tiahuanaco in South America. These sites tie into other fascinating things that are discussed in the released document. But, when I say document, it really is, essentially, an essay that was put together as a non-fiction book. It was written by some unknown person named Chan Thomas, back in 1963. It was published by Emerson House in 1965 under the title the “Adam and Eve Story”

For some completely unknown and mysterious reason, or reasons, this book was classified by the CIA, the Central Intelligence Agency, back in 1966. It wasn't made public again until 2013, thanks to the Freedom of Information Act. But, it wasn't actually released to the public until 2016. This was done so in the form of a heavily sanitized document. In fact, at the very top and bottom of every single page it literally states those exact words.

This is where things get weird and will really make you think. When I say it was heavily sanitized, the original book was apparently 284 pages long. Yet, they only released 57 pages. In fact, they omitted entire pages altogether.

For example, the released file jumps from page 7 to page 9, leaving us with no answers as to why all of page 8 was completely removed. There's also no blacked-out redactions of any kind found anywhere in the 57 pages. But the fact that it was sanitized means that it was pieced back together in ways that we are not aware of.

declassified version of The Adam and Eve Story.

Please leave comments below about what you think after you have read it.

At the end of the day, I must admit to you that I had to use my very best and most secretive research techniques. I was able to find the original copy of this document. And I must say, “It is shocking!” I can now understand why it was classified in the first place.

Very briefly, the original document scientifically proves that there is a regular, cyclic period, where the earth is subjected to a cataclysmic event. Every time around, this disaster nearly destroys the entire world population. It is devastating.

The big, hidden secret, that might panic the world and cause total chaos, is that the destructive cycle comes around far more often that most of the world realizes. In other words, the original document reveals that we are very close to seeing the return of the event. It could literally happen at any time now.

I look forward to discussing this with you further in the comments section at the bottom of this page.