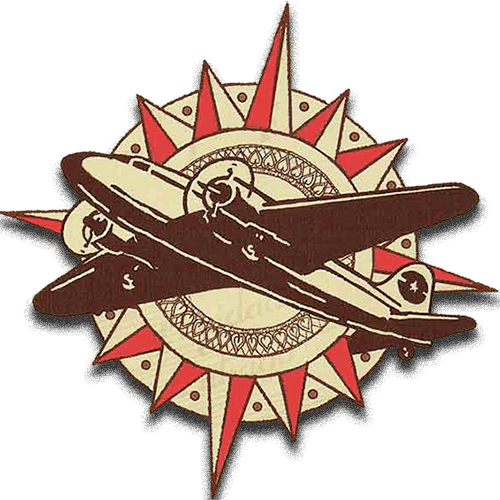 ​Question: Is it really possible to find gold near my home?
Answer: Yes, there is lost and hidden gold everywhere in the world

Question: If it were really possible, wouldn’t everyone already be doing it?
Answer: Most people don’t know where to go to find gold or how to do it.

Question: If it is possible, where do I go and how can I search for gold?
Answer: Just read this training course material below.

Question: How much an ounce of gold worth?
Answer: Kitco.com

Find Gold Near Home This Week 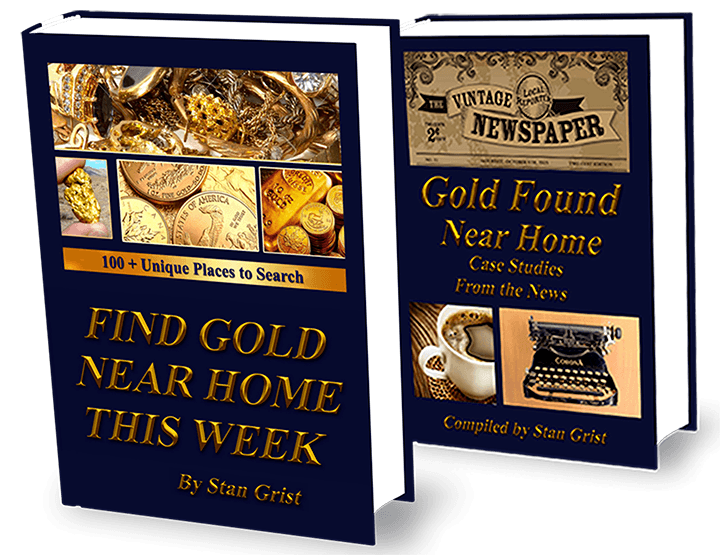 Armed with the "Secret Information" in my new e-book, Find Gold Near Home This Week, you can go out and find gold near your home this week.

Does that sound a bit outrageous? This statement would probably sound like an exaggeration to me too if I hadn’t already been finding gold all around me for the last 50 years.

I’ve made it my "life’s work" to find gold and now you can share in all of those years of my experiences and results.

Here are just a few of my experiences with finding gold over the years... 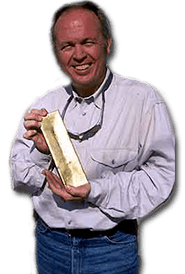 Me and My Friend

I grew up in a middle class urban community, a suburb of Detroit. When I was still quite young, I built my first metal detector from a kit. The kit was produced by a well-known, electronics company in Michigan called Heathkit.

The unit was a simple TR (transmitter/receiver) type model GD-48 and cost less than $100. I worked tirelessly, all day long at the project, carefully soldering and assembling everything in strict accordance with the instruction manual. Early the next morning, the rubber sealant on the coil was finally dry. I literally ran out into the front yard of my home to do my first test. I was shocked when I immediately recovered two silver quarters, one laying right on top of the other. I thought I had died and gone to heaven. 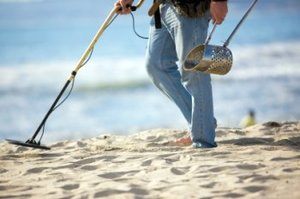 About an hour after finding the quarters, I went across the street to my neighbor's yard (with permission) and within only 15 minutes there, I found a gold engagement ring with a small diamond. It was only an inch or so below the surface. Since that first gold discovery, I have been finding gold for more than 50 years.

About six years after finding my first gold ring, I had the opportunity to visit relatives in Placerville, California during a Thanksgiving Day break from my first year in college. They took me to visit Sutter's Mill, the site of the first gold discovery in California. That early discovery eventually led to the great gold rush of 1849. During the visit, I learned to pan for gold too. To put it conservatively, that experience gave a whole new meaning to my studies in geology. It actually led to a severe case of gold fever, from which I have never recovered. 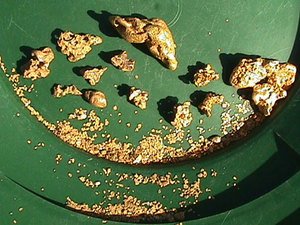 About ten years after I started coin-shooting with a metal detector, I read the news of a woman near my childhood home in Livonia, who found a rare, privately minted California gold coin dated 1855 in the back yard of her home. The coin was later appraised for $250,000. She had no idea how the coin got there. This news motivated me to raise my standards and learn how to make greater recoveries.

What you can expect to get from my new e-book: 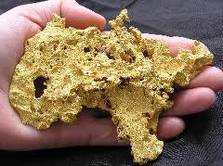 A few more of my personal experiences...

During an annual event with the Gold Prospectors Association of America in 1985, I personally witnessed the recovery of fifteen ounces of gold in a single day by a three-man gold dredging team. They recovered this gold from a large bedrock pothole in the Stanislaus River, in the Mother Lode Country of California. It had taken them only two days to reach bedrock with a six-inch dredge. This particular team regularly recovers more than three hundred ounces of gold each summer. I closely tracked their successes for five years.

While living in Northern California, one day I watched as my uncle hand-picked three quarters of an ounce of gold flakes from a growing pile of gravel that resulted from a water well being drilled in his backyard. He lives in Gridley, California, a small town at the foot of Mother Lode Country. To this day, I wonder just how much gold lies beneath that city.

I found more than 2 ounces of small and medium sized gold nuggets in a single day in the desert near Quartzite, Arizona with a borrowed Minelab metal detector. This took seven hours of backbreaking nugget shooting. I must have bent down to dig a few hundred times that day (great exercise!). This area still regularly produces great results for nugget shooters.

I recovered just over an ounce of gold rings in one day in the shallow waters of a popular beach near Oceanside, California. At the time, my day job was working on an ambulance as an EMT. After that first day, I went back to the beach on every free occasion I had. I still did well each time, but never more than an ounce of gold per day after that.

I once recovered four and a half ounces of bright, coarse gold from a gravel bar on the North Fork of the Yuba River in one day. I was on a pay streak with only eighteen inches of gravel sitting on shallow bedrock. I was shoveling river gravel into a two-tier, diagonal, sluice box with water being supplied by a motorized pump. I was only twenty feet from the paved road, three miles upriver from Downieville, California. A 1908-nickel showed up in my riffles that day too.

As a consultant on a mining property, I discovered a rich quartz vein with visible gold in an abandoned gold mine near Wickenburg, Arizona. The former claim owners had let the claim expire five years earlier. I also found rich alluvial gold in every dry wash for miles below. My clients immediately claimed the area and began a small production the year after. 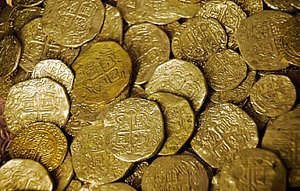 I once panned a half-ounce of gold in a single day from a paystreak in a small stream about twenty five miles north of Atlanta, Georgia. This is a very rich historical district near Dahlonega, where the first-ever American mint was established.

A partner and I discovered a large, old pile of unwashed, rich, gold-bearing gravel left by the old-timers in the Henry Mountains of southern Utah. Together, we panned just over one ounce of gold before returning home that evening. We returned there several more times over a two-year period.

Years ago, I panned three ounces of gold in one hour from the concentrated pay gravels of a private, alluvial gold mine in the Yukon, near Dawson City. Of course, these pay gravels cost thousands of dollars to excavate with heavy equipment. We also found an ancient mammoth tusk that day.

I found a gold ring with a small diamond during a three-hour search two years ago at Sunnyside beach, just north of Miami. Other professional locals normally find an average of an ounce of gold each day there in shallow surf. They also regularly find old Spanish coins from offshore wrecks. These usually sell for many hundreds of dollars each. 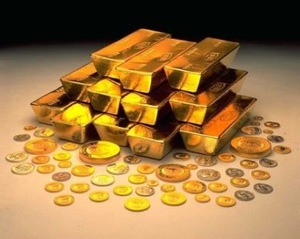 I once owned a small, retail store called "The Prospector" in Provo, Utah, from which I sold metal detectors and gold prospecting equipment. In two years, I met more than twenty people who had each found thousands of dollars of gold in one form or another. I followed up on more than a dozen leads from these people. I made more money from finding gold than I did from store sales in those two years.

One of these leads led me to a site on the Snake River, not far from Jackson, Wyoming. At this (secret) site, several friends and I recovered four ounces of flour gold in three days using a mercury coating on a copper plate surface (not environmentally ideal!). E-mail me if you want to know the exact site.

Another lead led me to a spot near Helena, Montana where a teenager had found a pile of gold nuggets in the middle of a large field. A glacier, millions of years before, apparently deposited these nuggets. I searched for two days and only found one small nugget worth about $50. Some searches are not as good as others.

The final lead I got in my store took me to Brazil and hundreds of ounces of gold over a five-year period, but that is another story for another book in the future.

​These are only some of my personal experiences in North America. My Latin American gold prospecting experiences are a different story and much more amazing. However, these do not apply to the theme of this book, which is to find gold close to your home. Actually, gold can be found almost anywhere. You just have to know how and where to look.

This book should give you some new ideas and strategies for finding your fair share of the heavy stuff.

Gold can be found in many different forms such as gold rings, gold coins, gold nuggets and flakes, complex ores, circuit boards, old jewelry and gold bars, to name a few. My new e-book teaches you how to find lost or hidden gold near your home! 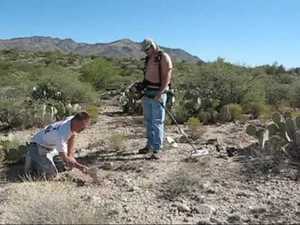 How would you like to be able to develop the ability to go out near your home and find gold whenever you like? Can you imagine the feeling of watching your gold collection grow into a sizeable nest egg over several weeks or months? This ability to find gold is the real "Goose that Lays Golden Eggs".

My new e-book, Find Gold Near Home This Week, reveals more than 100 of the best places where I have found the most gold. I have helped my clients to find lost & hidden gold in these places too. I'm not saying that these are the only places to find gold, just some of the best ones in my experience.

You do need to have a metal detector to find gold in some of these places, but in many of them, you can simply search with your naked eye.

Have a look at my Table of Contents below and you will already begin to get a good idea of where to start looking. 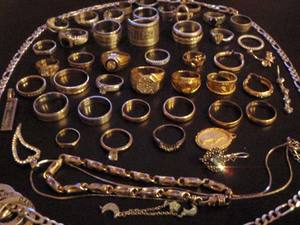 Chapter 1 - A Few Words About Research

Chapter 2 - Gold in Your Home & In Your Neighbor's Home

Chapter 3 - Gold Outside of Your Home

Chapter 4 - Gold in Your Neighbor's Yard (with permission)

Chapter 5 - Gold in the Yard of a Stranger (with permission)

Chapter 6 - Gold in Your City

Chapter 7 - Gold Around Water Near Your Home

Chapter 8 - Gold Outside of Your City Limits

What you can expect to get from my new e-book:

If you are reading this page, you likely know very well that the price of gold is just about ready to explode upward. You know that the world economy is in shambles and that the more gold you own, the better off you will be. You also likely know the Golden Rule: He Who Owns the Gold, Makes the Rules.

Practice what is in this e-book and you will be on top as world conditions continue to slide downwards!

To purchase any of these e-materials, please click on the corresponding "Buy Now" button. You may pay with ​any of the major credit cards accepted by Payza. These are instant downloads! There are no physical products sold here. Nothing will be shipped.